It’s been a while since I have made a recording with my brother Jason.  About five years ago I did an interview with him to collect his perspectives on ‘silence’, which was a really positive experience for the both of us as we found out that we held similar insights in common on the topic.  This new interview experience was just as good for us, if not better. We talked for more than an hour covering topics that ranged from our relationship with each other to our relationship with our parents, love in general, faith and religion, creative writing and self-love.  I honestly do not think we have ever had such a rich discussion.

Unlike most people, if you put a microphone between Jason and I, we just seem to make a better connection rather than become uncomfortable. It may be due to the fact that our recording history goes way back.  I think we actually formed our relationship at an early age around recording ourselves – we made our first recordings when he was 12 and I was 8.

During this interview exploring our relationship, the most memorable (and I would have to say most amusing) recording experiences surfaced. Jason and I for a brief time were in a “band” together. My role in the band was primarily making the background sounds. I made drum sounds on chairs – hit glass bottles together, did some occasional screaming and once put my tape recorder in a metal mail box and threw rocks at it to get the right clinking sound.  Jason was the genius 12 yr old rhymer and rapper who also took samples from popular songs and looped them together for background music.  I only made guest appearances spewing out Jason’s written lyrics on certain songs. All of these songs were recorded with the high tech technology of hand-held tape recorders.

I find it fascinating that both he and I are still making recordings today.  And strangely enough we are both recording ourselves talking to ourselves. (He records his written poetry that he recites and I keep audio journals)

Listen below to hear an excerpt from our conversation.  Here we talk about our relationship today, what it was like when we were growing up together and most importantly the first time ever release of JJ Creator and BB Originator.  I also included some excerpts from his experiences with life changing relationships and love in general.

** Warning** I must apologize to my mother as I am not sure if she has ever heard our early recordings before now. We were not really bad kids just kids in the country with a lot of time on our hands. We also looked up to the Beastie Boys and Weird Al Yankovic a bit too much. 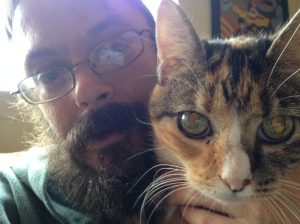